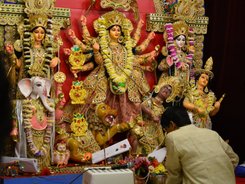 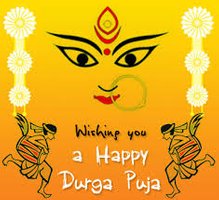 In 1999, three families in North East England put forward the idea that they would form an organization to bring the festivity of the Bengali Hindu Puja season to their local community. An association was formed by these families, and the name North East of England Bengali Puja Association (NEEBPA) was selected. NEEPBA was duly registered as a charity in the UK.

It is worth noting that we celebrate the only Durga Puja within a hundred mile radius of Newcastle-upon-Tyne.

The objectives of the organization are as follows:

To hold Durga Puja, Lakshmi Puja and Kali Puja as authentically as possible in the North East of England.

To create a puja atmosphere, which people still held fondly in their memories from their time in the Indian subcontinent.

To enlighten future generations of Bengalis, ensuring that these young people do not miss out of these very important festive occasions as they grow up in the UK.

To enable local Bengali Hindus to be educated and enlightened of their rich culture and traditions.

To invite and encourage the wider regional community to participate in our religious and cultural occasions, and thereby increase cultural awareness and diversity in the region.

In the first year (1999) we started off by performing the first ever Kali Puja in the Hindu Temple, Newcastle upon Tyne with great success. In the following years to date, both Durga Puja and Kali Puja have been performed. Increasing numbers attended year after year, making the occasions outstandingly successful. In these few years NEEBPA has grown in strength and membership, with many enthusiastic people joining and helping the organization.

At first the Puja was done in front of a Ghot and a picture of the Goddess. As the Puja grew, the ambition of the organizers increased and in 2003, after a fund-raising campaign, Pratimas of Goddess Durga and that of Goddess Kali were brought over from Kolkata in India. Since 2003 we have held the Pujas in the presence of these Pratimas. We are indebted and deeply grateful to all those who made this possible.

Our Pujas have been held at the Hindu Temple, 172 West Road, Newcastle-upon-Tyne. We are very grateful to the committee of the Hindu Temple for providing us with this facility. We are fortunate in that we have had a large and easily accessible venue for our Pujas.

At the end of 2006, buoyed by the tremendous success of this year’s Pujas which saw as many as 200 people attending on Asthami and Navami Puja, a new and larger Puja Committee was formed and we are entering a new and exciting phase as we seek to consolidate and improve the Puja.

Throughout the history of our organization, we in NEEBPA have been fortunate that as well as having dedicated Committee members, we have had tremendous unofficial support from others in our community that have given their time and energy to keep the Puja going, from preparing the prasad to helping cook the food in the kitchen to tidying up afterwards. It is these people, too numerous to mention, that have kept our organization alive and thriving.

We pray to Ma Durga that we continue to have the strength and energy to continue and celebrate the Puja for many years to come.

The Committee wishes to recognize the following individuals who have been deeply involved in the Pujas from the earliest stages of NEEBPA or have been an integral part of the success of our Pujas.